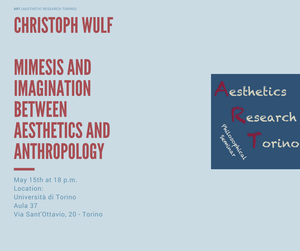 Mimesis. Cultura, arte, società (Mimesis. Culture, art, society) by Christoph Wulf and Gunter Gebauer makes available to the Italian public the reference text in the international literature and the most extensive survey work dedicated to the problem of mimesis, after the monumental book of Erich Auerbach (1956) from which it explicitly takes the moves. Through the main stages of the elaboration of the notion from classical antiquity, medieval, renaissance, six and eighteenth century theorists, up to the great nineteenth-century novel and contemporary philosophy, the book discusses the concept of "mimesis" which does not only indicate the process of imitation, but, in addition to the sphere of aesthetics and artistic expression, refers to a broader capacity for mimicry, similarity, assimilation, representation, simulation, registration, expression and mimetic anticipation. The mimetic faculty concerns human activities as a whole and plays a central role in anthropogenesis, in the birth of the subject and in the development of each person's personality. Mimesis contributes to the aestheticization of the world and to its transformation into image. Mimesis triggers the vertigo of desire and mimetic rivalry, the instigating of the violence of assimilation and expulsion of the different. At the same time, mimesis makes possible the opportunity for a non-instrumental relationship with the other and with the world, it discovers unexpected similarities and unpublished mixes, and values ​​specific differences without dissolving them in generic terms but showing respect for things and for human beings. Together with Mimesis, Wulf's collection of essays, Homo imaginationis - which also explores themes such as the intertwining of emotion and ritual within cultural communities, the intercultural education in global society, the concept of performativity and the role of imagination in the construction of the human - brings out the deeply aesthetic tenor of the anthropological perspective developed by Wulf.

On the occasion of the release of:

PEDRO MEDINA is curator, art critic, teacher, researcher and editor in contemporary culture, especially design, video-creation and digital media. He has a degree in Philosophy from the Universidad de Murcia (1996) and a doctorate in Cultural Sciences from the Scuola Internazionale di Alti Studi in Modena (2001). He worked as a researcher at the Istituto Universitario di Architettura in Venice (2002-2003) and since 2006 he has been the Director of the Cultural Area at the Istituto Europeo di Design in Madrid, where he also teaches a range of history of art, aesthetics and semiotics subjects. In addition, he is in charge of the Editorial IED http://iedmadrid.com/sobre-el-ied/editorial-ied/ (2013-) and IED Sapere (2016, Italy, Spain and Brazil). Among his publications: La muerte de Virgilio. El final de una ilusión estética (2006) ed Economía del Diseño (2015); he writes frequently in "Artecontexto" and "Le Monde Diplomatique". Among his exhibits: Mapping Madrid (online e IED Madrid, 2009) and El hilo de Ariadna. Lectores, navegantes (Matadero Madrid, 2012-2013).

ART (Aesthetic Research Torino) is a periodic philosophical seminar
organized by the Department of Philosophy and Educational
Sciences of the University of Turin and the PhD Program FINO. It is coordinated by Prof. Alessandro Bertinetto.

ART addresses different topics of the contemporary debate in
Aesthetics: philosophy of beauty, philosophy of the arts, theory of
sensory experience, philosophy of image and imagination, and history of aesthetics.